The road to becoming a Senator in Nigeria comes with so much pains, sacrifices and responsibilities. Don’t get it twisted, these hassle are for their personal and selfish interests! The thoughts of serving the electorates has been washed out completely from their sense of reasoning so they go any length to get elected with their body and soul focused on the hyper inflated salaries of being a senator in Nigeria for little or nothing being done at the helms of affairs.

As a senator of the Federal Republic of Nigeria, you are automatically classified as a law maker irrespective of your area of discipline. For the sake of those who may not be aware, the National Assembly (widely known as NASS) is Nigeria’s highest legislature saddled with the responsibility of making laws as summarized in chapter 1, section 4 of the 1999 Nigerian Constitution.

The National assembly is made up of the Senate and House of Assembly. The house is made up of 109 Senators and 360 Honorable members known as house of assembly.

For the sake of this post we shall be focusing on the Senate. The 109 senators comprises of duly elected members from the 36 states with each divided in 3 senatorial districts each electing one senator; the Federal Capital Territory elects only one senator.

The current trends amongst politicians upon completing their 8 year tenure, that is, first and second term or lose their re-election bid, these governors either vie for the position of a senator of the Federal Republic of Nigeria or political appointment with the ruling party, not because they are eager to serve the district they represent but because they are simply attracted to the jumbo packages and fat undeserved salaries of senators in Nigeria.

No doubt that Nigeria is blessed with Rich human and natural resources. Talk about population, Nigeria is ranked the most populous nation in Africa, it is as a result of this, we are termed the ‘Giant of Africa’. However, this does not translate its full potentials in reality because Nigeria is ranked one of the poorest countries in the world today because of the high rate of corruption spurn out of bad leadership. You would wonder how possible it is for a country that her citizens live with less than 1 dollar pay day pay such huge sums as salaries to senators. It is quite pathetic.

There have been series of calls by well meaningful individuals to make the salary structure of senators in Nigeria unattractive in order to get credible and true patriotic Nigerians seek these sensitive positions but the federal government have on numerous cases cited cases in other parts of the world where Senators salaries are made unattractive and bribery and unnecessary gifts and grants becomes the order of the day.

As stated above, Nigeria currently has 109 senators receiving the salaries and jumbo packages we are about to expose below.  Some allowances below are totally uncalled for and unheard of. According to vanguard, Nigerian senators are the highest paid in the world, when compared to other developed countries. It is very callous, unpatriotic and unfair of the Federal govt to pay Senators such salaries when the average Nigerian survives on less than $1 daily.

In this post we shall be breaking down all the allowances and salary of the Nigerian Senate and we shall love to hear your thoughts on the subject matter because in times like this when the Nigerian economy is nosediving, hunger, job crunches,  insecurity challenges spreading across the nation like wildfire, such salary structure should be the last line of priority for the federal government of Nigeria.

Before giving you the breakdown of Senators salaries in Nigeria you might be wondering the duties of a sitting senator that has necessitated such unwarranted salary structure.

See the duties of a senator in Nigeria and do your due diligence to confirm if such responsibilities warrant their monthly and annual salary. 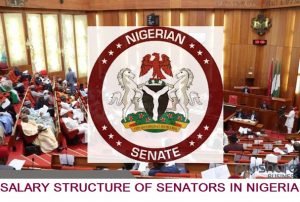 Duties and Functions of Senators in Nigeria

Talking about the duties of senators in Nigeria in relation to their monthly salaries, the upper chamber, equally referred to as the Senate, is presided by the current Senate President, Sen. Ahmed Ibrahim Lawan whose primary duties are to lead, regulate and conduct the proceedings in the Senate.

The Senate president is assisted by the Deputy Senate President (Ovie Omo-Agege) both of the All Progressive Congress (APC) party.

The two major functions of the Senate are;

In clear terms, the legislative duties of the senate of to make law. The process involves receiving a bill from the house of assembly. It is termed a bill at this stage because it does not become law until it is passed by the legislature after it has been discussed, debated and voted upon, after which, it is then approved by the executive arm of the government (Mr President).

They serve as checks on other arms of the government. They cut the excesses of the Federal government, most especially, that of the president of the Federal Republic of Nigeria by making sure that the senate must consent to some of the political appointments of the President’s government, as well as consent to all agreements with foreign governments and try all impeachments process where necessary.

As we are about to reveal the 2020 monthly and annual salary of senators in Nigeria, everyone is entitled to his or her opinion here, please air your views via the comment section below so others can learn or counter with their opinion.

Breakdown of Salaries of Senators In Nigeria

Below are what comprises the monthly breakdown of salaries of Senators in Nigeria in the latest salary review. A new allowance know as HARDSHIP ALLOWANCE has been recently added to the monthly salary of Senators in Nigeria. This has so far received backlashes from Nigerians. Many have decried their hardship faced by the average Nigerian hence such allowance ought to be reserved for the masses and not senators who already are living luxurious lives.

See full breakdown of the salaries of a Senator in Nigeria. This includes the BASIC SALARY and other ALLOWANCES that accrue to them monthly. Under this is the tabular format of the salary structures.

Monthly and Annual Salaries of Senators In Nigeria For 2020

The figures in the table above is the prevailing salary structure of senators in Nigeria as at 2020. From the table we can see that a senator earns 29,480,000 Naira monthly and over 353 Million annual salary. Note that these salaries are the net figures, that is, tax and other deductions have been made already.

Do i need to remind you that the current monthly minimum wage as at 2020 stands at 30,000 Naira. A salary which is even yet to be implemented by more than 60% of the 36 states and 774 local governments in Nigeria today and a senator of the Federal Republic of Nigeria earns over 982 times of the newly approved minimum wage of 30,000 Naira monthly of the electorates.

There is need for dialogue because this cannot continue if we are to remain an indivisible entity. We would like to hear your take on this subject matter in the comment section. Thank you!