Baking soda is often confused with Baking powder. They both look white and seem to do pretty much the same thing. To become a chef of any category, it is important to know what is Baking Soda? how to use or what Baking soda is used for as well as being able to differentiate between Baking soda and Baking powder.

What is Baking Soda?

Baking Soda is a  popular leavening agent mainly used by chefs of different levels to cause dough to rise. It is better known to professional chefs and scientists for its chemical properties, and it is called sodium bicarbonate or just bicarbonate. Baking soda, sodium carbonate is an alkali salt—Alkali salts are soluble hydroxides of alkali metals and alkaline earth metals—and it reacts with the acid in dough on heating to release carbon dioxide, which is responsible for the rising of dough. Carbon dioxide is also the gas responsible for the fizzy feel in drinks, bubbles in beers and it is evolved during the process of fermentation. 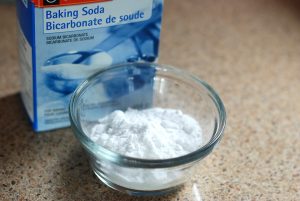 What is Baking Powder?

Baking Soda is called bicarbonates or  sodium carbonate, the difference with baking powder in the chemical composition is the fact that baking powder includes a mixture of other components along with bicarbonate. In essence it is a diluted baking soda. Baking soda is strong. In fact, it is about three to four times more concentrated than baking powder.

Why do some recipes include both?

Some recipes require both baking powder and baking soda for these reasons.

Aside from cooking, baking soda is a DIY delight, the numerous use and health benefits are based on its pH and alkalinity, as well as its anti inflammatory, anti bacteria, anti fungi antiseptic properties.  The benefits are discussed below..

Here are the 14 Uses of Baking Soda

Do you know that human sweat has no odour ? Sweat in the armpit is caused by bacteria in the armpit. Bacteria in the armpit breakdown your sweat into  acidic waste products that smell. Baking soda can be used to control the resulting smell from sweat as it is alkaline and can neutralize the acidic product of bacteria breaking down sweat. Hence removing the smell.

How this was discovered in the first place is what I don’t know, but finding baking soda for teeth brushing in small cups in the bathroom at home is something most people can easily relate to. Baking soda is so effective for the teeth that commercial toothpastes use it in the ingredients as mild abrasive and extra antibacterial. It is also used as mouthwash for its antibacterial and antimicrobial properties. A half teaspoon of baking soda in half a standard  glass cup of warm water, and then rinse as usual.

Also called heartburn, acid re-flux is when acid goes out of the stomach and up the esophagus. It is caused by excess food intake, stress, consumption of spicy or greasy food. A teaspoon of baking soda in a glass of cold water can help control it.

The foul smell lingering in the fridge after taking out rotting food can be controlled with baking soda. Fill a cup with baking soda and place it in the back of your fridge, this freshen bad smell by absorbing the smelly particles, which is more effective than just masking it. Also if you are sensitive to chemical products, you can count yourself lucky with baking soda to freshen your home. Baking soda is a perfect and safe alternative to commercial air fresheners. Put baking soda and 15 drops of your desired essential oil in a container or jar, cover it with a piece of cloth and use a clip or string to hold it in place.

In addition, spreading baking soda at the bottom of waste bins can help neutralize its bad smell effectively. This is important as bad smells can go beyond the waste bin and into the kitchen and rooms.

The mild abrasive property of baking powder makes it a kitchen utility. It is used to remove tough stains, and bad smell. To use, make a baking soda paste by adding small water, then smear the spot or surface of the kitchen ware with the paste and scrub thoroughly.

Carbonic acid is popular in commercial cleaning  products. At home baking soda and vinegar can be used to form carbonic acids. Carbonic acids easily remove tough carpet stains. To achieve this cleaning goal, cover the stain with a thin layer of baking soda. First, cover the carpet stain with a thin layer of baking soda. Then prepare a mixture of equal amount of water and vinegar and put in a spray. Spray the vinegar-water mixture over the stained area and allow the set up to lie for an hour. Then scrub with a brush

The mechanism behind using baking powder to extinguish fire is very simple. In chemistry we learnt that fire is extinguished when carbon dioxide is sprayed on it, and heating bicarbonates produce carbon dioxide. If you have heard about dry chemical fire extinguishers, they refer to those that contain baking soda. Dry chemical fire extinguishers are used for controlling small grease and electric related fire and can not be used to control large fire outbreaks.

People often find baking soda as an easy alternative to commercial cleaning products. Its mild abrasive and disinfection properties make it very useful for bathroom surfaces. To use, make a baking soda paste by adding small water, then smear the spot or surface with paste and scrub thoroughly.

Pesticides are used for preservation to prevent rodents, germs and destroy weeds, as well as protect fruits and vegetables against insect  infestation. A study showed an alternative method of removing pesticides from fruits to peeling is using baking soda. Soaking fruit in a solution of baking soda and water for fifteen minutes is a very effective means of removing pesticides.

Sometimes we get into the habit of leaving home in  our leather shoes without a pair of socks, but then it is too late because every one of our shoes now stinks and everyone else thinks we have developed a body odour. This can be very embarrassing but having a little baking soda can save us all of these embarassment . Pour two tablespoons of baking soda into two thin pieces of fabric, prevent the content from pouring out  by holding it with a rubber band and placing in each pair. Remove the baking soda bags when you want to wear your shoes, and return it when you are done using the shoes.

The cost of controlling the growth of weed around the home can be frustrating. When they are eventually removed they leave their deep roots and grow all over. This situation can be controlled with much expense with baking soda. The high level of the metal sodium in baking soda can make produce make the environment of growth unsuitable for weeds, hence causing it to wither. Take a handful of baking soda and sprinkle on and around weed-infested places..

Canker sores otherwise known as aphthous ulcers or aphthous stomatitis are small, painful sores that can form inside the mouth. canker sores can not be passed to someone else and they do not form on the lips. Making mouthwash from baking soda can help soothe the pain. Dissolve half teaspoon of baking soda in half a standard  glass cup of warm water, and then rinse as usual.

Cancer is the world’s second cause of most deaths after heart disease. It is a serious concern for doctors and deeply funded research is always put into it. Cancer produces lactic acids that stimulate vascular endothelial growth factor and angiogenesis which enables the blood vessel building of a tumor  that is essential to bring the nutrients for its survival. Sodium carbonates  is one of numerous anti-cancer nutrients used in intravenous infusions. Sodium bicarbonates have a very high pH (about 10)  which produce an uncomfortable environment for growth of cancer cells by making it less acidic. Nature enthusiasts amongst the well experienced doctors often recommend that some cancer patients consume up to ½ teaspoonful in water a few times per day.

Baking soda offers a safe and natural treatment for the skin in the right amount. The mild abrasive property makes it a good exfoliator by removing dead skin, oil or bacteria clogging the skin pores and the anti-bacterial and anti-inflammatory properties of baking soda also prevent recurring acne and rashes too. Baking soda is also very useful in controlling yeast infection, doctors can recommend the consumption of  about half a teaspoon of baking soda mixed with a standard glass of water for two weeks for internal yeast infection. To treat yeast skin infection, a paste with baking soda and water on the skin for 2 to 4 minutes which is then washed off can be effective.

The Bottom Line is baking soda is the active ingredient in baking powder, they both contain sodium bicarbonate but Baking soda is pure while s Baking powder contains an acid agent and drying agent. Both are used to impact the flavour and texture of baked food and also used in the preparation of important mixtures on the DIY level and even commercial level. Baking soda is common and offers a cost effective means to effectively replace commercial products that can sometimes be harmful. It’s pH, mild abrasive, antibacterial, anti-fungal property makes it a must have for cleaning, as an emergency to extinguish small fires, to control odour or bad smell, in beauty as teeth whitening, health  and many more.