The danger of cultism in student communities and schools is without doubt an enormous one, this is why we cannot help but wonder if the sensitization about its imminent repercussions is producing the intended result and not the opposite-causing interest in it. Student cultists are everywhere, and they can be anybody whether male, female and sometimes even very intelligent students. The best way to avoid cultism and protect yourself, and other students from trouble with them or too much interaction is to know how to identify a cultist at school when you come in contact with them or from afar. 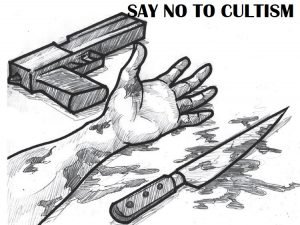 I will jump straight into this with ten signs that you can watch out for to identify a cultist in your class, and lodge.

12 Strong Signs on How To Identify Cultists In Higher Institutions

It is important to note that even when we are certain that these are signs that easily give someone away as a cultist, it doesn’t mean that everyone that exhibits one or some of the signs are definitely cultists. However, you should be very cautious around any student that exhibit any of the following signs; it doesn’t matter if they are cultist or not, such friends can be a bad influence and derail your goals in school.

They call this clawing. This is one of the first things that can easily give away a fellow student or lodgemate as a cultist. The handshake is very important for them and they do not share with just anybody. If you are with a group and you notice that two or more people always get a long weird handshake different from the rest of you, this can be a sign that you need to rethink your clique.  Cultists from different fraternities have their own unique handshakes, if you are getting the odd handshake too then it may be a sign that you are considered a potential for initiation and you should avoid such friends altogether.

The cultists “fly colour”. This means they have a dominant colour in their dressing mode: the trousers, caps and beret, yey-glasses, shoes etc. These colours can be bright colors: blue, red, yellow or black. It is considered highly offensive to them if someone that doesn’t “belong” puts on a considerable amount of the color in their dressing mode in environments that the cultist fraternity is dominant, and such students can be harassed and told to pull it.

CHECK:  Top 10 Insurance Companies In Nigeria And Their Services

Cultists are “nightwolves”. They don’t usually go out in the day.  They go out at night and come back at odd hours. This is also a way to avoid imminent clash with rival cultists. During the day when they eventually come out they are always around the clique.

As mentioned above cultists prefer to go out at night and if you find them in the day it is rare to see them outside the clique: they live together in groups, drink and smoke while listening to loud music together and they stand for one another; but the reality of what happens is beyond what is seen, they are in blood covenant and consider their membership more important than even family ties. If one of the cultists is exposed the rest would be an easy guess.

The consequence of moving in clique for cultists is that if one of them gets into trouble with rival cultists all the rest are targeted, this is why it is considered important that the house they live in is kept a secret as much as possible. If you notice that your neighbour often comes home restless and looking to evade someone this might be a sign that he or she is a cultist.

Do not make the mistake to consider every student with tatoo a cultist, but know that most of them are cultists. If you find out  that your weird neighbour has friends that share matching strange looking tattoos you have a good sign. Fraternities have their unique tattoos, tattoos of animals like scorpion and snakes are common, seadogs for buccaneers ; and objects like axes for cultists of the black axe fraternity; another tattoo and strange symbols include a skull, two cross-bones and an anchor for pyrate confraternity.

If you find out that a friend, classmate or neighbour in school possess weapons or chemicals-especially acids-or carry it about when they have no justifiable reason to do so, then they most likely  belong to a cult or other bad company, and you should avoid them altogether.

Cultists bear odd nicknames. The name means so much to cultists because they are earned and not just given for the sake of having a nickname. Cabal is the most powerful name and if you are mistakenly called this name by your non cultist friends for any reason  you can be made too deeply for it. There are other names like executioner.

The cultists are confident of the backing from the clique and members of their fraternity and believe they can get away with any trouble. Avoid them even if you are the vice chancellor or rector’s  child because their connection may extend far beyond the school and up to top politicians on state level who are secret senior members. They don’t forgive or forget.

This is coming at the last because it is the ultimate sign here. Fraternities have their unique language and slang. You can sit around them and not get a clue for what they say in a thirty minutes dialogue. They are that strange.

Another means of identifying a cultist in any university, polytechnic of colleges of education is through their attitude. Most are very mannerless especially the field guys (Guys that carry out the dirty jobs) or the newly recruited ones. On the contrary, the Dons are usually very quiet, respectful but very dangerous when provoked. They say there is no smoke without fire hence the attitude of cult boys in schools, that is, when you see a very mannerless guy ready to fight or threaten you at every minor altercation, simply apologize and take to your heels because he has got backings of his fellow cultists who are every ready to make life unbearable for your stay at school.

Nowadays cultism isn’t synomous with poor boys in higher institutions. From latest findings, most yahooboys are cultists. They may not be involved in the hitting of other rival cult groups rather, they are financiers of their various cults. They join for sake of being protected from other cult groups and the price for this is that they would serve as financiers of the occultic group. You would do yourself a great help by avoiding them or having issues with them. If in anyway you cannot avoid them, be distant friends with them, give them their due respect and accolades because they could be of help to you when oppressed by another cult group.

The government and school authorities have been extremely violent with issues of cultism in school in an effort to put a stop to the menace at every level. It takes a collective effort from every student to identify cultists in school and help the agencies apprehend them for the safety of all. If any student hides information that may be crucial in apprehending cultists, then they have put their own lifes and the life of other students and community people at great risk.